Legends wear a lot of names. Researcher. Professor. Inventor. Entrepreneur. Pioneer. CEO. Champion. The University of Alabama knows something about legends. We have them in our classrooms, in our labs, on the field and among our alumni. Find out how you can become an Alabama legend, too. Space energy anomalies more than 50 million light years from our galaxy are creating conditions that should be destroying stars, but instead are regenerating them, according to an astronomer at The University of Alabama.

Dr. Jimmy Irwin, UA associate professor of physics and astronomy, along with a three-student team of undergraduate researchers, detected seven instances of massive flares of energy in X-ray binary stars in two separate galaxies after poring through over a decade of Chandra X-ray Observatory data.

But, unlike supernovas or gamma ray bursts in other galaxies, which collapse and are destroyed by huge increases in energy, the two stars researchers detected flare to the verge of exploding, only to simmer to baseline energy in an hour. They repeat the process every few days. Learn More... Seth Panitch, professor of acting in The University of Alabama’s department of theatre and dance, has earned the 2016 Blackmon-Moody Outstanding Professor Award, one of the most prestigious awards given by UA. It is based on a specific accomplishment that is innovative, creative, useful or captures the imagination.

Panitch was the first U.S. director to helm a professional theatrical production in Cuba since the Cuban Revolution with “Merchant of Venice,” which played at the Adolfo Llaurado Theatre. As a result, the Cuban Ministry of Culture invited him to direct four more productions in Havana.

One of those productions transferred to a historic Off-Broadway theatre in New York, becoming the first bi-national production there in 50 years and drawing coverage from some of the most notable news organizations in both Cuba and the U.S.

“His work, seen on the most significant national and international stages, as well as on film, has attracted a spotlight on the arts at UA that has not only raised the stature of his own career, it has hugely impacted the national recognition of the department, College and University, as well,” said Dominic Yeager, assistant professor of theatre at UA. Learn More... The University of Alabama licensed the technology behind a collapsible sideline tent designed to give better medical care to athletes to a spin-off company that will develop, market, manufacture and distribute the tent.

The SidelinER is the result of collaboration between Crimson Tide Athletics and UA’s College of Engineering. A provisional patent has been filed for the innovative design developed by Jeff Allen, director of sports medicine at UA, and four senior mechanical engineering students.

The tent can be set up within seconds on any sideline without blocking the view of fans watching the game. Most of the game, the tent is collapsed onto the ground, but if an injured player needs an evaluation by the medical staff, it quickly expands over the examination table. Learn More... Before the 2016 Olympics in Rio, Simone Biles was not a household name. With the spotlight on her, she impressed the world with her outstanding gymnastics moves and her four gold medals. Many Olympic athletes became overnight sensations for their feats in the water or on the mats, tracks and fields.

So, what comes after Rio? How do they turn their success into a marketable image? They need a personal brand. And, three University of Alabama media professors are helping.

To teach Olympic athletes how to manage their public image, the International Olympic Committee teamed with Athletic Learning Gateway in London to create an online class to teach current and former athletes how to build their personal brands. Learn More...

The University of Alabama is growing its thriving community and searching for more than 300 new faculty to join a collaborative environment leading the nation through transformative research, innovative teaching and integrated community service. With a strategic focus on opportunities and resources that facilitate work-life balance, UA is launching this new endeavor to attract outstanding faculty and staff. Find out how you can be a part of the legendary UA family. 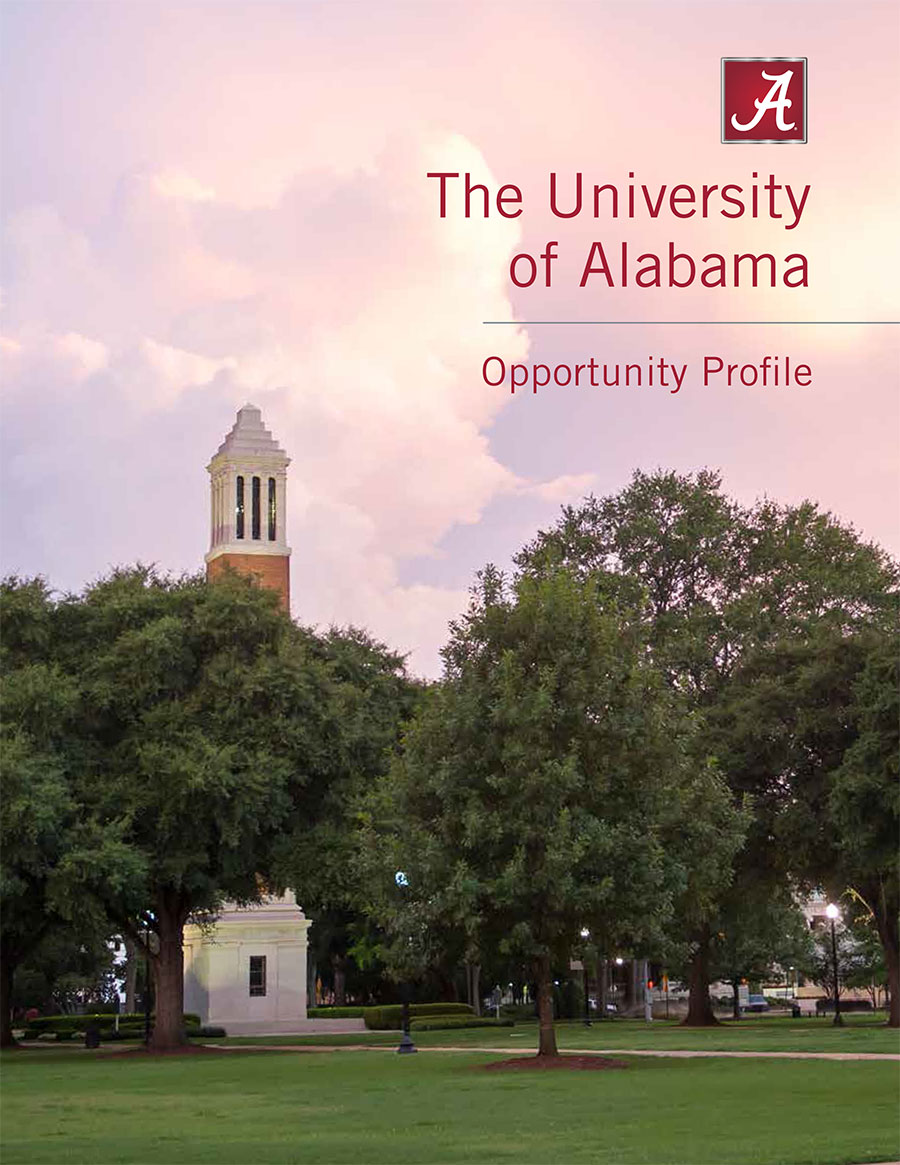 View a full-screen slide show or a printable version.

UA is a leader in water, severe weather, and disaster management research and is nationally recognized for its focus on the protection and restoration of the nation’s water supply and natural environment. UA programs, through coordinated interdisciplinary research centers, strategically integrate scientific discovery with its transformation into technological, socio-economic and policy applications. Researchers work closely with the National Water Center, a NOAA facility located on the University campus. Research conducted at UA helps provide broadbased strategic planning to meet the needs of the state, region and nation. Learn More...

UA has a long history of transportation and automotive research focusing largely on the activities of the University Transportation Center for Alabama, the Center for Advanced Public Safety, and the Center for Advanced Vehicle Technologies. The addition of recent efforts establishing a Transportation Policy Research Center is crucial as UA recognizes state-wide and national needs. The convergence of all of these centers with the growing automotive industry in the state and region is allowing Alabama to become a global hub for automotive R&D with a particular emphasis on traffic and vehicle safety and advanced driver assistance systems. Learn More... 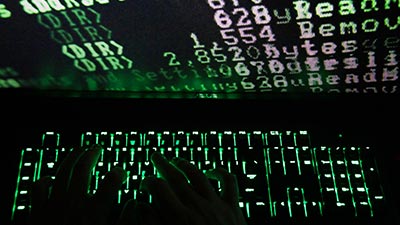 Cyber Security, Cyber Forensics and Information Technology have become vital concerns of the world’s infrastructure. Research carried out in a number of UA centers and departments concentrates on cyber and information technology. This includes work on cyber systems, IT hardware/software along with the development of applications to address issues related to public safety and security, business profitability, and geographic information systems. Learn More... 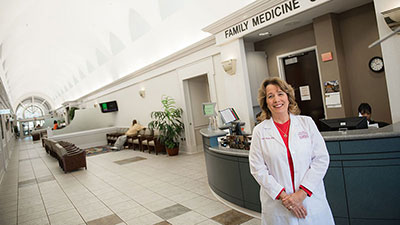 UA features a number of nationally recognized programs in health care, including prominent research in community medicine, mental health and aging, child development, and rural health. Other health related activities include biomedical engineering, cancer cell research, genetic influences on obesity, and Alzheimer’s Disease, to highlight a few. Those research strengths are being tied together toward a holistic focus with a new UA initiative focusing on life span research. 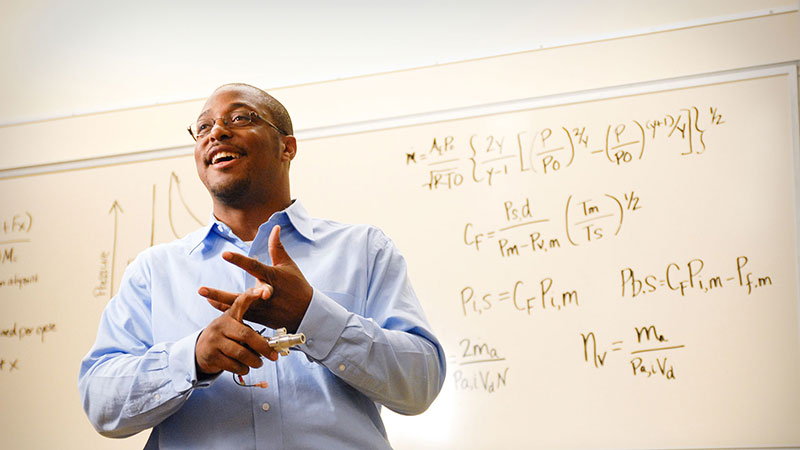 As the state’s flagship university, The University of Alabama family has always focused on being the best. 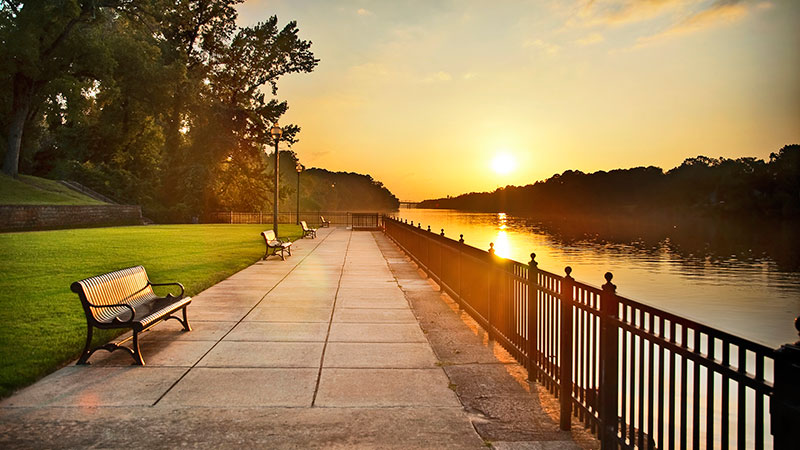 Found along the banks of the Black Warrior River, the city of Tuscaloosa houses 99,543 residents. 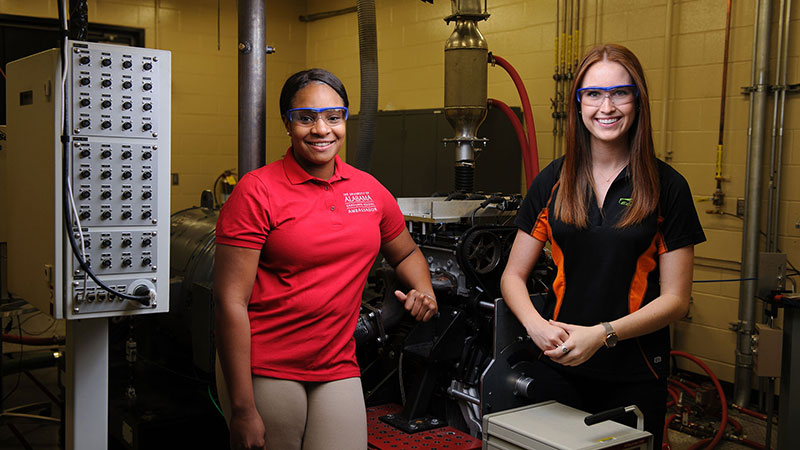 Energizing Alabama’s flagship by investing in its continued success and propelling it to new heights. 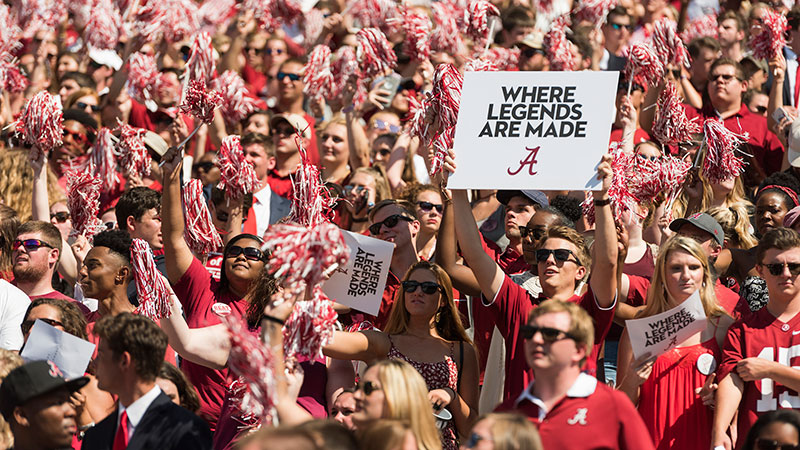 Where Legends Are Made

Where Legends Are Made is about our past, present and future.

UA is a leader among public universities nationwide with more than 500 National Merit Scholars currently enrolled.

36 UA researchers are included in the National Academy of Inventors.

UA does not discriminate on the basis of race, color, national origin, sex, age, disability, or veteran status. See our full policy at: https://eop.ua.edu/law.html.